WHAT ARE WE UP TO?

A Great Article About How We Became JNT Construction

Our “people-first” priority sets us apart from other roofers and contractors. JNT thrives because of the people, aspirations and culture that make us special. Check out this article featured on Construction News. 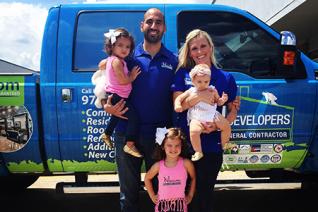 DALLAS/FT WORTH – Jorge Abreu moved from Miami to Dallas 11 years ago, but he still enjoys incorporating a bit of his birthplace into his work. Customers who are put on hold when they call him at JNT Construction hear Cuban music rather than elevator tunes. He serves catered Cuban food at the annual holiday party, and cooks similar fare for his employees at an event he calls “Cuban Night.”

“I miss my family there, and I miss the beach, but not the every day living. I definitely like Dallas for that,” he says.
He says Dallas has also been better for his business.
“The economy is great here and also the clients. Everyone is really personable,” Jorge says. “As long as you meet [customers’] expectations, you’ll get referrals, and our business was built on referrals.”
Jorge, who earned an electrical engineering degree but began buying and selling real estate in Miami, moved to Dallas in 2007 to do the same. With the help of then-girlfriend-now-wife Tasha Abreu and childhood friend Eric Bodiwala, his plan was to invest in and remodel properties. However, they soon learned that buying was the easy part.
“We started doing that full time. We had a lot of properties, but were having trouble finding a good contractor that was reliable, so I opened my own contracting company,” Jorge says. “I thought I had enough experience.”
His experience was gleaned from observing his father and uncle, who owned a commercial blind installation company and a general contracting company, respectively. Jorge once worked for his uncle as the CEO’s assistant and absorbed as much information as he could. Even with his industry knowledge, however, Jorge says he still had reservations
“I had a plan, but I wasn’t sure at the time if [the company] would be what it is today,” he admits. “I had to locate a lot of subcontractors to get the work done, and learn how to handle the cash flow and operations. When we started, it was mostly just remodels for investors. Now, we’re actually working off of plans, designing and building.”
In 10 years, CEO Jorge, CFO Tasha and chief sales officer Bodiwala have grown the company to two divisions: Commercial and residential roofing and turnkey general contracting services. The company now employs a team of more than 20, who enjoy working and playing together.
“We always have a quarterly outing,” Jorge says. “We’re actually doing a team building event at Group Dynamics soon, and we’ve done Top Golf and bowling. We also just registered as a kickball team and everybody on the team is going to participate. We try to do different things as a team; it’s a lot of fun.”
Although Jorge hasn’t officially made fun plans to commemorate the company’s 10th anniversary, he does have other plans.
“We have a goal this year to open our first branch office in Colorado and then, as soon as we get that set up, have more follow. We also have Houston and San Antonio on our radar,” he says. “I’d definitely like for the company to expand.”
Subcontractor JNT Construction is located in Dallas. –mjm

This article originally appeared on http://www.constructionnews.net/dallas-fort-worth/industry-news-df/14323-from-miami-to-metroplex.html